Here are my favourite discoveries of the day...

According to the man himself, Allan Massie prefers not to describe the physical appearance of his protagonists. Why? Because he's looking through them – not at them.

In his event today, Sam Bourne talked about an astonishing piece of research. In the '40s, '50s and '60s, Yale and Harvard (among other Ivy League universities) systematically took nude photographs of every new undergraduate. This was supposedly for a study of posture, but in fact the data was being collected by two researchers with an interest in eugenics, who were looking for a correlation between physique and intellect. Among those that would've been photographed were Hilary Clinton, George Bush Sr, and Meryl Streep.

Have you heard of Edinburgh's mysterious artist who makes sculptures from the pages of books? Of course you have! He or she has been mystifying and delighting the city for a year now, and today in Charlotte Square gardens a number of delicate paper roses were discovered. There are supposedly fifty of them (so many still to find!), each with the quote by Oscar Wilde: “freedom, books, flowers, and the moon”.


You may recognise the Book Festival's series “Elsewhere” from previous years. Fifty writers have been commissioned by the Book Festival to write a short story or an essay on the theme of elsewhere – and on the website you can read them all, and even listen to some of them being read out by the authors.

The printed book of all fifty of these Elsewhere pieces was launched this very evening in a much-anticipated event packed with enthusiasm. You can now purchase it from the Bookshop and enjoy the very addictive result of a very satisfying project. 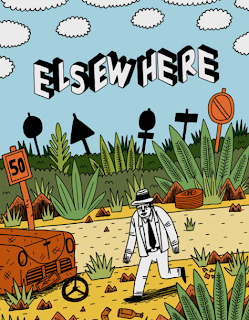 Posted by edbookfest at 22:02 No comments: