We've been gradually adding a series of podcasts recorded by Lesley Fraser-Taylor at this year's Book Festival. Today we've added interviews with John O'Donoghue, author of Sectioned: A Life Interrupted, which chronicles a decade of his life spent in and out of institutions as he battled with mental illness; and Lucy Hawking, who talks about teaming up with her father Professor Stephen Hawking to create George's Cosmic Treasure Hunt, the second in a trilogy of books designed to explain physics to children in a fun way.

You can find these and more on our website, or subscribe (free) on the iTunes Store.
Posted by webmaster at 12:58 No comments:

More Audio for you to catch up with

Just added the Val McDermid talk, with great chat and some more tales from the casebooks of Dr Tony Hill and Detective Carol Jordan.

William Boyd's latest, Ordinary Thunderstorms, is the thrilling tale of a young Londoner, victim of an unknown conspiracy, who seeks survival in the city's darkest reaches and in this event he tells us all about it.

Mark Millar candidly discusses comics, graphic novels and Hollywood with Stuart Kelly in this sold-out Book Festival event. His bestselling comic Kick-Ass is being made into a film this year.

In this event Alistair MacLeod agreed to travel across the Atlantic from his home in Ontario he discusses his life, work and the importance of his Scottish heritage with Richard Holloway. His work is epitomised by his award-winning novel No Great Mischief.

One of the hottest tickets of the 2009 Book Festival, we were thrilled the creator and writer of HBO’s universally acclaimed TV series The Wire, David Simon, took time out to come to Edinburgh for the Book Festival.

Finally for just now, Sebastian Barry, after being awarded the coveted Costa Book of the Year Award earlier in 2009, this multi-talented writer (he's a poet and playwright too) reads from his novel and chats to Diana Hope in an engrossing event.
Posted by webmaster at 19:22 No comments:

Eminent historian Paul Preston explores the courage and skill of leading foreign correspondents such as Hemmingway, Gellhorn, Orwell; Croatian writer Dubravka Ugresic introduces her new novel, Baba Yaga Laid an Egg; Malorie Blackman introduces Double Cross; Marina Lewycka, author of A Short History of Tractors in Ukranian introduces her latest book We Are All Made Of Glue; and finally for now Alain de Botton brings us The Pleasure and Sorrows of Work.
Posted by webmaster at 09:57 No comments:

September may be the cruellest month, but it gives us a chance to catch up on permissions for audio events to go online! 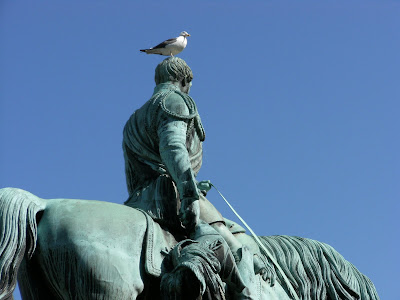 September is the cruellest month. After almost a month of books and banter and parties and gaiety and days of adventures that are 'ever-changing, always beautiful' (in the now 3 year old words of EIBF photographer Pascal), and meeting people both new and exciting and comfortably familiar, the circus leaves town. Just like in that amazing poem that Carol Ann Duffy wrote in Harry Patch's memory, everything begins to happen in reverse. Books are packed up. The tents come down. Computers and cables and lights and microphones and chairpeople are returned to their rightful places. Goodbyes replace hellos. Cruel month!
So we shall have to focus on the lovely things three weeks in Charlotte Square brought to get us through. A roll call of honour, in no particular order: the press pod massive banter factory; the moon shining on Prince Albert and the seagull who sat on his head; lounging with a mint choc chip ice cream when the sun had his porkpie on and wearing wellies with a tweed skirt and adopting a war time spirit (the tweed helped) of keep calm and carry on when it didn't; quietly tapping one's toes over lunchtime jazz and big soup; jostling about in queues of people who just want to discuss the event they've been in, or the one they're going to; the woman who told Antony Sher, when signing a book for her son, to inscribe: 'be exactly who you want to be'; the unanimous audience reaction to Raymond Blanc's account of eating squid in Japan; Raymond Blanc in general; Carol Ann Duffy's beautiful poem, 'Inside the Yurt', for Catherine Lockerbie on her departure; people swaying and clapping in the aisles to Emmanuel Jal; the thrillingly large queue for the Scottish Poetry Library's 25th birthday event; Chris Close's work-in-progress photo exhibition 'Between the Lines'; Charlie Connelly taking a photograph of himself with a backdrop of audience to prove to his mate Steve that he did manage to make it to his event, having been in Dublin a mere hour and a half before; a well-timed bookshop brownie run and Claudia's cockaleekie soup; taking visiting friends for a quick nosy round and ending up tipsy 3 hours later in the middle of some hugely digressional conversations wondering how on earth that happened; brilliant Johnson's knowing exactly how to blag free strawberry tarts and pecan pies and one's fortuitous proximity to the press pod when this happened; Helen's glorious return and that stookie; the yurt girls' charm; audience member: 'Mr (Alistair) MacLeod, please tell us you are working on something new...' AM: 'I hope to, before death'; moths in the Spiegeltent, Gruffalos in the Yurt; overhearing this prime cutlet en passant the Spiegeltent: 'well I couldn't possibly tell you. Oh go on then. Brace yourself...'; meeting people, both old friends and new; parties; gaiety. Books.
Hurray for this cosy blanket of memories, of good times, good people and great banter to keep cruel old September's chilly blast at bay.
Posted by Peggy at 12:11 No comments: