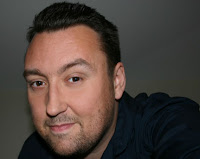 Award-winning author Barry Hutchison recently took part in our Elsewhere new writing project. You can read his stunning Elsewhere piece, The Unclaimed Girl, on our website.
We’re delighted to welcome Barry as guest-blogger for the day. Read on to find out how he approached the Elsewhere brief, and brought The Unclaimed Girl to life…


Fittingly, I had just moved house when I got the call asking me to take part in the ‘Elsewhere’ project.

I’d relocated my family from the Highlands of Scotland to a town just outside Edinburgh, and was feeling a bit like a fish out of water. I knew no-one, had no idea where anything was, and I was starting to wonder if we’d made completely the wrong decision.

So, when I was asked to take part, I knew I could put at least some of that to use. I just wasn’t quite sure how.

I went through a number of ideas, trying to pick one that excited me. My son had just started a new school, and I saw a potential story there. A new kid, making friends, getting to know new teachers...

There was potential there, but it felt too small, somehow. The short story format lends itself well to smaller, more intimate tales, but I wanted a stronger concept. I was already nervous. My first book was only published in February 2010, and I was being asked to contribute to a collection featuring some major international writing talent. A story about the first day at a new school wasn’t going to cut it.

I needed something bigger.

But, no. It still felt too “normal”, and normal isn’t something I’ve ever been particularly interested in. I scrapped the whole thing and tried coming up with some new ideas. My INVISIBLE FIENDS series features some pretty full-on horror, so there was a possibility of doing something in that genre, but something about that starting a new school idea kept dragging me back to it.

I felt a buzz of excitement. The idea was definitely “bigger”, and it was certainly less “normal” than the plain old first day at school idea. I knew then that I’d found my story. A girl starting a new school in the afterlife – what could be more Elsewhere than that?

But, during the course of writing the story, my mum was diagnosed with cancer. Her prognosis was grim, and suddenly my thoughts on the afterlife became less abstract and more concrete.

Without planning it, the story changed. It was no longer about a girl starting a new school in the afterlife, it was about how it would feel to suddenly find yourself there, with no idea where “there” actually was. It was about coming to terms with death, when the death in question was your own.

I’m happy to report that since I wrote the story, my mum’s health has improved dramatically, much to everyone’s surprise. It appears that, despite all expectations, she wasn’t ready to make the train journey Imelda Brown makes in the story. Imelda is tough and stubborn – a survivor. My mum, it seems, is even more so.

Overall, I’m happy with the way THE UNCLAIMED GIRL turned out. I enjoy stories that imply a life for the characters beyond the tale’s boundaries, and I’m 100% sure that Imelda has a whole after-lifetime of adventures ahead of her there in the City of the Dead. Perhaps, one day, I’ll check up and see how’s she’s doing. I suspect, like my mum, she’ll be doing just fine!
Posted by edbookfest at 11:50 No comments: