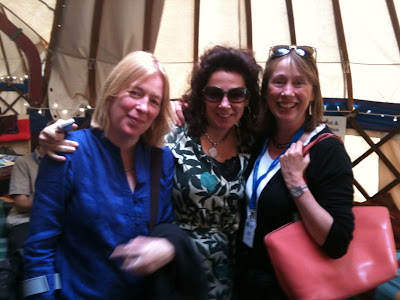 Posted by edbookfest at 17:27 No comments:

Labels: behind the scenes

On Sunday 22 August we'll be hosting the Book Festival Open University event. On Sunday morning the Party Pavilion will be open to all, free of charge, for OU information, opportunities and course sign-ups. Drop by at any time between 10.30 and 16.00.

Everyone’s invited along to this one-off Book Festival event. Chat to OU staff about new developments, enjoy complimentary refreshments in OU’s café area, and take full advantage of this excellent opportunity to get updated about ’s valuable and successful Open University, which has been a great supporter of the Book Festival for eight years running.

Posted by edbookfest at 16:02 No comments:

The Book Fest and the Filmhouse team up to great effect

The Book Festival is all over the place! We're delighted to direct you towards Space & Light Revisited and In the Wake of the Flood, two events in association with the Book Festival, at the Filmhouse Cinema, home of the Edinburgh International Film Festival.

Space & Light Revisited will be showing on Sunday 22 August at 15:30. In 1972 Murray Grigor created a nearly wordless 20-minute film in tribute to St Peter’s Seminary, an incredible structure located in Cardross and described as a "building of world significance". The Filmhouse will project the original film simultaneously alongside Grigor’s own remake.

On Saturday 21 at 17.00 there's In the Wake of the Flood. It's a remarkable film which follows the story of Margaret Atwood's extraordinary worldwide book tour. The film also looks at the ever-increasing international successes of literary festivals such as Edinburgh’s.

See you at the Filmhouse!
Posted by edbookfest at 14:25 No comments:

We met James Robertson yesterday just after he attended John Glenday's poetry event and persuaded him to read a short fragment from his excellent new novel "And The Land Lay Still" and muse upon the power of poetry.

Posted by edbookfest at 13:18 No comments: