This year we have invited a number of guest bloggers to write about the Book Festival. Today’s post is by Ken MacLeod who came to see Alan Warner. Ken is part of the ESRC Genomics Forum writers team. 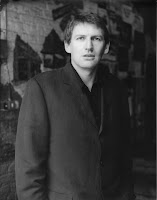 This year's theme for the Edinburgh International Book Festival was decided last year. With what was described at the launch party as uncanny prescience, the theme was 'revolution'. There was a definite echo of that in the voice of the first author I heard on Saturday: Alan Warner, Edinburgh University's newly appointed Writer in Residence. Catchily if clunkily billed as 'Sopranos author does trainspotting', the event, chaired by Zoë Strachan, centred on Warner's reading from the MS of his forthcoming novel The Dead Man's Pedal. It's about a lad who by mistake becomes a trainee engine-driver on a West Highland railway line in 1973-74: a moment when Britain seemed to edge closer to a pre-revolutionary situation than at any time before or since - though not quite as close as some of Simon's more radical work-mates think, as they trade banter in the station hotel bar. Warner first came to prominence with Morvern Callar, which like his later The Sopranos and his current The Stars in the Bright Sky was hailed for its brilliant evocation of young female voices. In the section he read, the man from Oban showed a similar - and on the face of it less surprising - fluency with a range of male voices, from political badinage over a pint to pained recollection of war's absurd horror between swigs of the hard stuff. But catching the cadence of the industrial work-place, and indeed of working-class socialism, isn't as easy as it seems or as easy as it used to be - not that many have tried.

Answering questions from the chair and the audience, Warner explained that The Dead Man's Pedal takes place in the same 'place of the imagination' as his other novels set in and around 'The Port', a town which is not quite Oban. The place has become so vivid over the years that on visiting Oban he now finds himself wrong-footed by his own imaginary geography. His approach to writing is not to attempt a 'perfectly crafted 220-page Booker novel' but - following his exemplars Beckett and Kelman - to give his characters scope and freedom to develop, to say their piece; and then to edit down the long manuscript that results. He begins on more than one novel at a time, and works until he knows which is the one that demands to be finished - for which approach he's thankful he has an understanding editor with a steady nerve. Asked why the sentences in his later novels were easier to understand than some of those in his first, Warner wasn't sure he agreed, but added that he'd found that writing doesn't get easier if, as he does, you set yourself harder challenges as you go along. This bracing directive was followed by a reading of a passage he said was as close to its real-life source as he could make it: an account by the narrator's (and Warner's) father of a grotesquely needless loss of four lives in an armoured car in an Italian ditch. This sobering account was lightened by the interruption of loud explosions, from the fireworks opening the evening's Military Tattoo.

'Eighty-eights' Warner said, cocking an ear. 'I'd recognise them anywhere.' Even the most realistic writing has to go beyond experience.


Born in Stornoway, Isle of Lewis, Ken has been a full time writer since 1997 authoring thirteen novels, including The Star Fraction (1995) and Intrusion (forthcoming, 2012), plus many articles and short stories. His novels and stories have received three BSFA awards and three Prometheus Awards, and several have been short-listed for the Clarke and Hugo Awards. In 2009 he was a Writer in Residence at the ESRC Genomics Policy and Research Forum. Learn more from Ken’s blog The Early Days of a Better Nation.
Posted by edbookfest at 15:31 No comments: