As an author or chairperson you seldom really see your audience. The house lights are down during the first part of the event, and when they come up for questions, you can usually only single out the person speaking from the surrounding sea of faces. But as a musician in the Spiegeltent, it’s quite different. The lights remain up, and in the café-style intimacy of the place, you have plenty of time to study your audience as you play.

Last night we (the Birnam Quartet: two fiddles, mandolin and piano) began our set at 9.00 and by 9.30 the tables were filling up with exactly the kind of cross-section of people one would expect to find at the Book Festival. Young, old and middle-aged, couples, singles and small groups of friends, some Scottish (judging from the nods of recognition as we worked through our repertoire of the tunes Robert Burns set his songs to), some visitors I guessed from appearances, and also from the looks of intrigue at this perhaps unfamiliar music.

People came and went. By the second set, as we moved onto some more up-tempo sets of tunes, the Spiegeltent, or maybe it was Charlotte Square itself, was really working its magic and (happily for us) there were smiles and looks of appreciation. Feet tapped, fingers drummed table tops. A well-known broadcaster sprang from her booth and twirled her partner in the aisle. The place felt relaxed, warm, womb-like almost, and I imagined that all the literary experiences of the day were being released by the members of our audience to mingle with the music we were making, words and notes swirling around inside the softly lit, mirrored, wooden panelled tent.

It was just one of the many moments that make August in Charlotte Square so extraordinarily special.

Posted by Jamie Jauncey at 19:15 No comments:

We've just added another 7 audio events featuring 10 authors from the first half of the Festival for you to download.

Web stats say Alan Bissett and Ewan Morrison are the most popular so far today!
Posted by webmaster at 17:04 No comments: 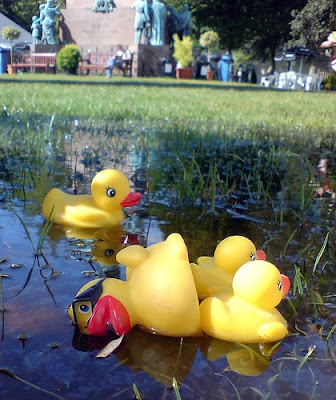 Because Alice just mentioned them. An excuse to post this photo if ever I read one...
Posted by Peggy at 14:36 No comments:

Being part of a book festival, we are often asked to measure things: how full are our theatres? How long is the signing queue? What is the total height of the participants of each event if they stood on each others shoulders? (Answer: results vary wildly. Frank Skinner, suprisingly diminutive, and Will Self who, armed with tiny dog, is a towering specimen of manhood, are living proof). Often we try to measure things well in advance, and to predict exactly what each measurement will mean.

But there are some things which, until they happen, you simply cannot predict: how many inches of rain will it take until the infamous EIBF ducks can be seen floating merrily in the puddles? How many hours of sunshine until the mud turns into lawn again, and becomes picnicable on? (Answer: not many. Book festival go-ers are very brave, and will picnic on even the swampiest lawns.)

And there are some things which it is most delightful not to measure. The joy, wisdom, and twinklings of genius which shine through in the portraits of authors hung around the site. The rapture of a happy audience member who has finally met an author. It is always magical for a reader to meet someone whose fictional worlds they enjoy. The laughter of the seemingly endless seas of children who pour through the doors. The amount of ice cream and cake you can eat in a day.

So while we might know how many tickets we've sold, and how many authors we've given sandwiches to, we don't know the details of every nice experience, every happy coincidence, every joyful picnic on our swampy lawn.

So do tell us. We are curious to know, even if we cannot ever truly measure it.
Posted by Alice Tarbuck at 13:33 1 comment: