"It's that poetry again" 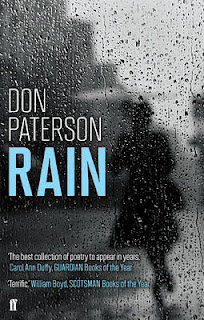 From Li Po, to Battlestar Gallactica, from two trees to evidence against intelligent design (his back and male genitals), Don Paterson was in sterling form on a wide variety of topics at his reading this morning. Introduced by Nick Barley, director and fan of guest poetry selector Paterson, Don started his hour long set with the lovely 'Two Trees', of Don Miguel's idea to fuse a lemon and an orange tree together, and of how those trees were split asunder. 'And trees are all this poem is about.' he ends, though it took writer and friend Will Fiennes to dissect the meaning for him, as sometimes the meaning isn't apparent to the poet till after. As with the series of elegies written after the death of his good friend the poet Michael Donaghy, as if his sub-conscious were forcing him to address his passing. He read another for the passing of Peter Porter - in a session which found itself ruminating upon death and ageing and change - glad Faber managed to complete Porter's Selected Works just in time to bike it over on the day he died. "Managed to get a smile out of him".

The whole reading was built of these meandering glimpses of insight - to a poem, to a poet, to a friend, a son, to the process - making it a hugely entertaining and revealing session. He dipped into a few aphorisms, causing much hilarity with 'Aphorism, a brief waste of time. Poetry a complete waste of time. Novel a monumental waste of time', explaining that the aphorism invites bitchiness, often about other aphorists. He wheeled back to read from the multi-award winning Landing Light, poems for his twin sons - a balanced number for each, re that contractual obligation that is the problem with twins. Told of receiving an email from Amazon, suggesting he'd like to pre-order a forthcoming book on Shakespeare's Sonnets, not yet written by himself. The paperback cover of Rain, a Rebus novella lookalike? "Here's hoping." An epithalamium for friends rewritten featuring aliens, having been inspired by the box set of Battlestar Gallactica (I refused to watch this show, so my better half's glee at Don's approbation was exaggerated). A translation of Li Po, remarking on his friend Du Fu's failed health, skinny as a nail, wan as the moon, saying 'it's that poetry again'.
So it was that poetry again, to which we turn, as Nick Barley said in his intro, to hear our experiences articulated. Stellar stuff.
Posted by Peggy at 13:20 No comments: