And the first txt2win winner is... 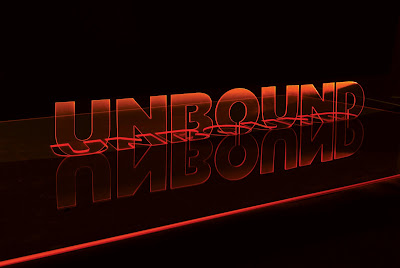 We’re delighted to announce that the first winner of our txt2win competition for a pair of tickets to the Unbound Grand Finale 7pm on 30 August is Emily Montgomery. Congratulations Emily!

The competition continues next week, with another pair of tickets to the Unbound Grand Finale and Book Fest goodies to be won.

You can enter as often as you wish.

Simply text
BOOKFEST
+ FLIRT or LOVER
+ YOUR EMAIL ADDRESS
to 60777

Posted by edbookfest at 17:10 No comments: 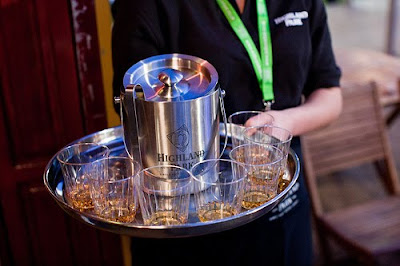 Lorraine Mariner, John Hegley, Tim Turnbull and the fine jazz machinations of Ewen Maclean, Tom Pickles and Callum McIntyre; the rouged embrace that is the Highland Park Spiegeltent gave a splendid welcome to last night's poetical Unbound stylings, a night where poetry didn't have to rhyme. Where poetry concerned imaginary friends called Jessica Elton, potatoes, spectacles, bungalows and a man with two heads.
Lorraine ('unholy alliance of Dorothy Parker, Stevie Smith and Frank O'Hara') kicked things off with a lovely set in which she read from her two collections Bye For Now (The Rialto) and Furniture (Picador). She read about love and imagined love, about not committing to just one chair in the staff room, about learning how to write predictive text.
John Hegley came next. Wielding his customary ukulele, he sang of Eddie who doesn't like furniture and did a rap about guillemots and hamsters. He plucked a willing audience member from the (pleasingly huge number of) folk in attendance to assist him in a French to English translation from his book The Adventures Monsieur Robinet and he had the audience join him in song for his closing number, the always-fabulous 'Luton Bungalow'.
After a wee breakette, and a few choice #UnboundEd stories (join in @edbookfest on Twitter) one of Scotland's three leading poetry moustaches Mr Tim Turnbull took the floor, fresh from his own gig at the Banshee Labyrinth across town. He told Tales of Terror of a two-headed man, read pithy musings upon our current administration and more. And we ended with Latin jazz from the extremely smooth Ewen Maclean on guitar, Tom Pickles on flute and Callum McIntyre on djembe.
With the sad news of Edwin Morgan's death, this was a perfect evening to do as Poet Laureate Carol Ann Duffy suggested we might, and take a pause to 'think of him with love and gratitude', to remember his immensity, his innovation, his poetry. So we charged our glasses and raised a toast. and what was the toast? schiehallion! schiehallion! schiehallion! (from EM's own 'Canedolia', 'an off-concrete Scotch fantasia'.)
This event at Unbound was presented by the Scottish Poetry Library. You can borrow the books of the poets above from us. Unbound is on until the Monday 30 August, is free and offers an array of treats every single evening (and I haven't even mentioned the complimentary Highland Park whisky cocktails or the cut-price sandwiches that do the rounds at midnight). We suggest you get yourselves to the Spiegeltent for 9pm as a matter of some urgency.
Posted by Peggy at 11:31 No comments: