'I love you as I love the Hatchetfish'... John Glenday 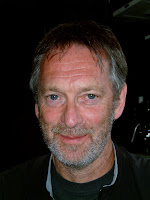 This morning, we partook of coffee, croissant and an hour in the splendid company of John Glenday at the Edinburgh International Book Festival. This event is part of the strand we assisted Don Paterson in programming, and the afore-mentioned was on hand to introduce the event and lob a few well aimed questions John’s way at the end.

Don admitted it was ‘a relief to be able to stop talking about John as poetry’s best kept secret’, in light of his recent brilliantly received collection Grain(Picador), 14 years after Undark (1995) which succeeded his first, The Apple Ghost (1989) (both Peterloo). Don, John’s editor at Picador, spoke warmly of John, saying his fastidiousness is legendary, and laughed about emails bearing the subject line ‘Glenday writes new poem shocker!’. He commended the skill and imaginative daring that went into these poems that were ‘so well-made’.

John read mostly from Grain, though sprinkled a few oldies from his previous collections in there (‘finding an old poem in the middle of the reading like one of those old tired jokes from a Christmas cracker’, though certainly not for the audience). He read the delightful ‘Tin’, a love poem, inspired by the fact that “the can opener was invented/ forty-eight years after the tin can”. He read about Orkney in ‘A Westray Prayer’, about giving things a name, about ugly fishes – because ‘ugly fishes have more depth’ – "I love you as I love the Hatchetfish,/ the Allmouth, the Angler". He spoke about a self-confessed lack of imagination, it being a "terrible burden for a poet because it means you actually have to start looking at things." Then he read us the fruits of his lookings – those ‘overlooked saints’ of ‘St Orage’, ‘St Eadfast and St Alwart’, "St Agger of the drunken brawling praise", life seen backwards in ‘A Fairy Tale’ his parents re-seen in his poetry. On the topic of his parents he said, ‘My mother put the words in the poem, my father put the silences. She’s the clockwork. He’s the spring.’ We are glad that in ‘the matter of life and death’ that it was to not let anyone know that you are writing poetry in Monifieth in 1963, that John prevailed.

You can hear more from John on the Scottish Poetry Library podcast.