The best of Asian literature showcased at the Book Festival

On Thursday the Book Festival hosted some of the best writers from Asia including Chinese authors Chan Koonchung and Bi Feiyu, as well as Tabish Khair and Manu Joseph from India.

During his event in the Writer’s Retreat, Chan Koonchung reflected on the work of creatives in contemporary China, commenting that ‘many writers are able to work within the limits of censorship and produce very good novels’. He went on to describe how many journalists ‘rush the yellow light’ before alerting the red light of the state, particularly in journalism.

The author later answered questions about his novel The Fat Years. Set in China in the year 2013 at a time when one month of official records have gone missing, The Fat Years has not yet been officially published in mainland China, but it has been circulated as a PDF download for the past year or so, causing great interest amongst Chinese intellectuals. The author said that the English translation was 99.9% accurate from the original and praised his translator Michael S Duke for doing such a great job.

The topic of translation was discussed again in the Voices of Asian Literature event, with three authors shortlisted for this year’s Man Asian Literary Prize, including the winner Bi Feiyu. Indian author Manu Joseph, whose novel Serious Men was written in English, joked that ‘I have even been translated into American!’. The three authors discussed the influence of their mother tongues and traditional languages on their writing with chair and co-founder of Jaipur Literary Festival Namita Gokhale. Author of The Thing About Thugs, Tabish Khair described how his writing has been influenced by European literature, ‘especially Russian literature’. All three writers commented on the growing importance of Asian literature and the attention it is receiving through events such as the Man Asian Literary Prize and the Jaipur Literary Festival, which is part of the Word Alliance of literary festivals, along with the Edinburgh International Book Festival.

This weekend the Book Festival will host China’s first winner of the Nobel Prize for Literature, Gao Xingjian who won the prize for his novel Soul Mountain, and Costa shortlisted writer Aatish Taseer who will be appearing in an event with Libyan novelist Hisham Matar.

The Museum of Acquired Authors’ Artefacts

If you’ve visited the Book Festival signing tent in the last few days you may have been lucky enough to catch a glimpse of our unique pop-up museum. Only one shelf in size, it was, for a brief time, home to a small but precious collection of author ephemera. Our photographer managed to capture it, before it was gone… 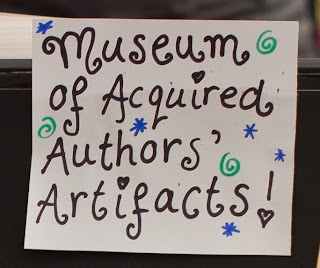 Posted by edbookfest at 13:36 No comments: