We asked you to help us write a story...

...and you did! We had some brilliant contributions to our story wall in the Activity Corner, where our young guests where invited to jointly create a story line by line. 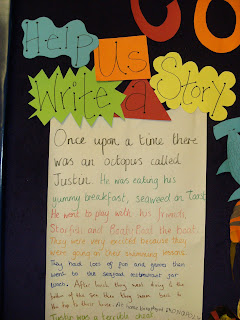 Below are some extracts of the stories we recieved - perhaps one day we'll see a few of these contributors appear as authors at a Book Festival in the future!

Once upon a time there was an octopus called Justin. He was eating his yummy breakfast, seaweed on toast. He went to play with his friends, Starfish and Boaty Boat the boat. They were very excited because they were going on their swimming lessons. They had lots of fun and games, then went to the seafood restaurant for lunch. After lunch they went diving to the bottom of the sea then they swam back to the top to their house. At home they played Monopoly. Justin was a terrible cheat. He always hid money in one of his many tentacles. He got told off, big time, and had to do some extra swimming lessons. Justin decided to gamble. He was cheating in Vegas for the last time. He was deported to France. Justin decided that he was a bad boy. He mended his ways, then he went back to the sea bed and started a new life. The End?

Actually it wasn’t! Justin went back to Starfish and Boaty and asked if they wanted to get some Jelly and Ice Cream for a special treat! But then came the fisherman and scooped up Justin and put him on the ship with no water…and he got sold to a restaurant as octopus and chips so that was the end of his life! (At the end of the meal, they found jelly and ice cream in his tummy!)

But…when Justin was at the table, it was someone’s birthday. So they had a birthday cake. Justin (who wasn’t completely dead at this point) saw the cake, made a quick wish and blew out the candles! The birthday girl started crying and demanded that the candles be relit. But it was too late! Justin had already stolen her wish! Do you know what Justin’s wish was? He wished that he had seven more lives!

He jumped off the plate and went to find Starfish and Boaty Boat. Boaty Boat and Starfish were in France having a swimming race. Justin realised that he had a mildly inoffensive voice and started a brilliant new music career under the new superstar name of Justin Bieber. He learnt to predict World Cup results and was bought by the Spanish. Sadly he was made into paella as he was deemed a weapon of mass destruction. Fortunately he had another six lives...

The branches swayed and the ground shook as something thundered towards them. “What is that?” whispered Alex in terror. “It’s a sparkly person!” cried Bob in fright. “Let’s run away before he sparkles too much and we pass out!”
“Don’t be silly,” said Penny. “Boys are such cowardly custards.”
But sure enough, a sparkly man burst out through the trees. But he was a friendly sparkly man and so he invited them to a sword fight for Snorth Narnia in New Zealand. However, on the way, they were interrupted by some boys doing the Haka, then others blowing vuvu zelas, some girls singing their personal version of “California Girls”, some boys who were scared by the Wallace and Gromit and Darth Vader theme tunes, some more-than-slightly-scary boys, some Outnumbered fans, some girls who were champions (but left soon), and some generally epic girls. They all charged at them while singing “Waving Flag.” Dennis the Menace knocked off a tall man’s hat but the man pulled out a clipboard with questions and just laughed. And then the great battle for Snorth Narnia began. Their teamwork and love for each other brought them together and they defeated the sparkly man and his sidekick, Justin the Octopus (who had run out of lives).

The Princess and the Pig

Once upon a time in a land far, far away…there lived a princess in a castle. One day she was walking in the wood when she saw a green pig. The pig popped up and said…”Why am I green?” “Because I ate too many peas. The peas looked so green and buttery and delicious, I just had to gobble them up.” The Princess said firmly, “Stop eating peas! Eat strawberries instead!” So the pig ate lots of strawberries and turned red!

Then she said, “Eat grapes instead!” So the pig ate grapes instead and turned purple! There there was a huge explosion! And he turned green, red and purple! He was very fat!

The princess correctly diagnosed the pig as having no PIGment of his own and suggested he only eat pink things like shrimp. “It works for the flamingos,” she said. And then the pig ate some shrimp and turned pink. He then ran away to eat some more peas and strawberries and grapes and turned every colour of the rainbow and died (because the princess wanted bacon for tea).Then the mafia arrived and killed the princess. The godfather stole the pig and ate it, but suffered heart failure and died. After the princess finished the story she went to the Edinburgh Book Festival where she met…

The train pulled out of the station. Thomas had no idea of the adventure he was about to go on…

Thomas chugged off. He sped through the countryside until all of a sudden he saw something on the track in front of him. He saw a humongous dinosaur. He stopped right away. He thought it was fake but when he went through it he nearly got gobbled up. He saw a tunnel ahead when he went in he lost a carriage…it was the one with the humans in it! He came out of the tunnel and he was at the edge of a cliff!

Thomas fell off the cliff. Thomas fell out and jumped in the water, The giant dinosaur ran and nearly bit Thomas in half! He had a cut where the dino had bit him. Fish in the water began to bite him- they were meat-eaters!

Thomas swam with the fish, who were still chasing him. He chugged slowly across the bottom. He was just beginning to think he was safe from the dinosaur when a huge foot came crashing down! It belonged to the dinosaur! Steam began to come out of his funnel and he got up a bit of speed…