Some snapshot moments from the Press Pod in Charlotte Square in the first week:

Introducing A L Kennedy to wildlife photographer Simon King in the door of the Authors' Yurt which resulted not only in a conversation about dead rats, but in my bumping into Alison shortly afterwards clutching two copies of Simon's book and heading for the signing queue - thrilled to have talked to him about choughs and ravens. Who would have thought it?

Griff Rhys Jones sitting at my desk in the Press Pod answering my phone, thinking it was to do a live radio interview with BBC Radio Suffolk, only to find himself discussing a photocall with Malcolm McLaren which confused everybody concerned.

Sitting deep underground in the basement bar of the Rutland Hotel, transfixed by an interview filmed for the BBC Culture Show with Neil Gaiman and Denise Mina (watch out for it on BBC2 on Wednesday at 7.00pm). Not being a graphic novel afficionado, Gaiman is a new discovery for me - and listening to him speak for 30 mins, I am most certainly converted.
Posted by Anonymous at 18:36 No comments:

We are now halfway through the 2009 Book Festival. Nine days have passed, and another nine days will elapse before the site empties and folds down onto itself like a tired, happy sigh.

But until then, we have all sorts of magic and mystery left to encounter.

Last night saw some fascinating jazz in the Spiegeltent, which tried - and very nearly succeeded - in making Portuguese a sing-along language. Aided and abetted by a tambourine, a triangle, and a drum with a hole in it, they strummed their way late into the night.

Inside the Author's Yurt, the whisky was flowing (indeed, several people commented on the heavy scent of liquor which hit you on entry). It became a place where cultures mixed: the delegation of newly arrived Swedish authors received an unusually gritty introduction to Edinburgh folk in the form of Irvine Welsh. The Yurt even looked the part: a roaring fire had transformed it from a respectable green-room into a fantastical Mongolian speakeasy.

The Yurt is not the only element of the Festival usually shielded from the public. The staff radios carry secret messages throughout the site, and they range from the banal to the ridiculous, often with very little middle ground. There are some tricky elements to radio manipulation: it is easy, for example, to forget just how many people can hear you. This particular blogger recently informed a good twenty or so people that she was on the loo, and just the other day a babe in arms grabbed someobody's microphone and coo'd angelically into the ears of the festival staff. Whether seeking lost handbags in the shape of dogs, or confirming that certain authors have indeed invited their two-hundred-strong audience to the pub after their event, there is always someone burbling away into a microphone.

There have been moments in the last week where you could have been forgiven for believing the site had turned into a dairy. Grahams Dairy have been giving out free milk at Storytime twice daily; there has been so much of the stuff around that visitors have consumed enough calcium to stave off osteoporosis for all eternity. As if that were not exciting enough, there have been bi-weekly ice-cream showdowns, when Graham's give away free samples of ice-cream mere metres from the Di Rollo stall...

So between Highland Park Whisky, oodles of milk, and August's obligatory buckets of rain, this year's Book Festival is turning out to have a distinctly liquid feel.
Posted by Alice Tarbuck at 18:20 1 comment:

Inside the Yurt by Carol Ann Duffy 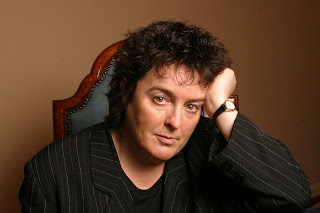 Poet Laureate and long-time friend of the Book Festival, Carol Ann Duffy has written a wonderful poem in tribute to our outgoing director Catherine Lockerbie. She read Inside the Yurt – a humorous and occasionally emotional homage to the book festival – at Catherine’s leaving do on Sunday 16 August and again at her public event on the Monday. It has subsequently been printed in the Times newspaper for everyone to enjoy.
Duffy said that it was difficult to put into words Catherine’s contribution to “the most magnificent, most important and most generous book festival in the world.”
“Catherine has got total integrity. That’s what makes it so special. It’s a shining light for language.”
Inside the Yurt by Carol Ann Duffy (for Catherine Lockerbie)
Inside the yurt was a pond where goldfish swam
and the poets fished for haiku, undisturbed
by the piper playing an old lament outside.
Inside the yurt was a parliament, the politicians
took off their masks at the door and lay down
with the truth, a dram, from where they watched
London Town floating away like a dream.
Inside the yurt was an elephant, a hump-backed whale,
a swarm of bees, a Vice-President of the USA
who had come to say enough was enough. Inside
the yurt was a mosque at dusk, the sound of a wholly
human voice. A novelist whizzed round and round
in the yurt in her red Ferrari. A scientist checked
his notes on the next tsunami. A polemicist helped himself
to a large red wine and salami. Inside the yurt
was a loch where the National Monster swam
and another dram … and another dram … and another dram …
Inside the yurt was a magic pen which signed the name
of someone who wasn't there. Inside the yurt was the key
to a prison cell; a candle burned. Inside the yurt
was a wishing-well, a Gaelic spell, the Hogmanay bells,
a nine-year queue of children, women, men,
two million, then, all in the yurt in a singing ring
for Catherine, for Catherine, for Catherine,
who brought to the yurt the living, giving word
and the bells and the books and the candles. Thank her.
Posted by edbookfest at 18:07 No comments:

There’s a touch of the inevitable with Henning Mankell’s appearances at the Edinburgh International Book Festival and yesterday’s was no exception as the Swedish author had to rush into his event in Charlotte Square Gardens after being trapped in a hotel elevator for over an hour. Once on stage, Mankell recalled his appearance in the literary city of Edinburgh a decade before, when he shared the stage with fellow crime fiction author Ian Rankin. Even then Mankell’s arrival was fraught with suspense and plot twists as he got lost walking through the New Town, just about making it to his own event. Inevitably, as if he was putting words to paper Mankell asked “what will happen next time?”

Unveiling some of the mysteries which surround the writer’s secret craft Mankell told the audience his infamous police inspector was named after… a scramble through a telephone directory. Shedding further light into the literary ways that have shot Wallander to fame Mankell revealed how a spot of bother – namely the inspector’s diabetes, diagnosed after the fourth book – have sweetened his popularity and generated worldwide sympathy.

The author could see how Edinburgh’s best loved detective, Rebus, and his own Wallander would have been friends and how their home towns – Edinburgh and Ystad – are infinitely brighter and more enlightened than the detectives’ dark minds. Numbers of tourists in Ystad are steadily going up and, pretty much like in Edinburgh, the first UNESCO City of Literature, fictional characters draw real people to the city.
Posted by edbookfest at 17:20 No comments:

Between the Lines with Chris Close 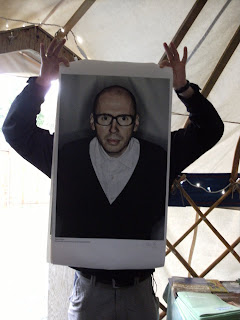 A radio call went up the other night: 'A L Kennedy and Carol Ann Duffy have fallen on site'. Several members of staff beetled out to help, looking for the two stricken writers (and wondering about the circumstances that led to such a freak accident), only to find that it was Chris Close's photographs of them which had fallen.

'Between the Lines' is a work in progress and the brain child of Chris (left, as David Peace). He pitched the idea to the EIBF; having specialised in landscape photgraphy before, he wanted to indulge his love of photographing people. After thrashing out the idea, they decided he'd take them of whoever was around and up for it, and they would be hung around the site. Carolyn blogged about them the other day, and you can see some photos of the likes of Emmanuel Jal and Carol Ann Duffy (hiding behind an onion).

I had a chinwag with Chris this morning in the press pod (coffee; pecan pie) as I wanted to know how he makes them. Quite simply he takes the photos throughout the day, and prints the snaps onto canvas at home in the evening. The canvas is sprayed to protect it from the Scottish monsoon, riveted, set to dry, and hung the next morning. Finding a way to secure them was a learning curve: nylon string snapped and plastic boards behind were too sharp. Garden poles from Homebase were just the ticket. If you're in Charlotte Square, make sure to check them out. Alasdair Gray's is especially marvellous.

Otherwise, very jealous hearing stories about last night's The Moth event. Stories in the Spiegeltent are the talk of the site.
Posted by Peggy at 12:02 No comments: