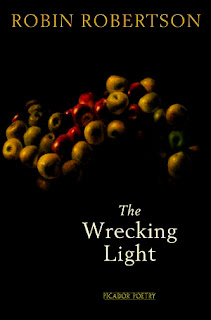 Death, madness, suicide and cats. Dying ones. Robin Robertson's Wake up to Words session in the Highland Park Spiegeltent was, as he said himself, likely to curdle the delicious free coffee. Fellow poet, guest selector and friend Don Paterson introduced with as many flourishing words as he dared - among which the lovely 'Robin's poems translate the world into sound' - we were told the format of the event was that 'Robin will read and then he will stop.' No questions, just an hour of poetry. Heaven.
However, Robertson's poetry often revels in a vision of hell. That poor cat, his moment in the sun teed off with 'I'll read one about cats. Normally I say I don't like cats and 6 or 7 people leave the room. So I'll not do that this time.' In 'Cat, Failing', the cat is dying, with the 'shame/ of being found out'. Robertson's dreams - "another uncomfortable dream for you" - transmuted into poetry, of sexual encounters with hairy-chested witches, among other nightmares. He read one he'd written for Sean O'Brien, that he revealed - drily - O'Brien had deemed obscene. He mixed old and new; 'Donegal', a tender one for his daughter from his first collection, then a long, new sequence on Strindberg, who Robertson admires, "less for his work and more for the catastrophe of his life."
In attempting to find something cheerier, he plumped "far from it!" with a poem about a chest haemorrhage, written in haste before his friend the novelist Alan Warner (as it happened, in the same booth with us) could use the real-life episode in his next book. "It [the chest] was all open. Did you get that? Wouldn't want to send you away dissatisfied." He did read a little funny called 'The Tweed' about giving Hugh MacDiarmid a back rub, before finishing with the exquisite 'At Roane Head'; with such staggering musicality and Robertson's wonderful, sonorous voice, this was an hour filled with amazed fixed grimaces and curdled coffee, but also those fizzy head moments poetry can bring; a sensation I'm led to understand the music world calls an eargasm.
Posted by Peggy at 12:19 No comments: