If you've been following the site build on Twitter you'll see all manner of familiar Book Festival shapes springing up in Charlotte Square Gardens. Which, by the way, is currently bathing smugly in dappled sunlight and promising cheekily that the sun will persist over August. But we know to be suspicious, don't we.

Either way, nothing can detract from the excitement of the coming weeks.

Judging by the buzz on Twitter (@edbookfest) it's going to be a good year for bloggers at the Book Festival. So be sure to tweet your Edinburgh International Book Festival blog posts and they might end up featured here!

Speaking of international events with infectious energy, the Olympics and the Edinburgh International Book Festival are going to enjoy a bit of a crossover. 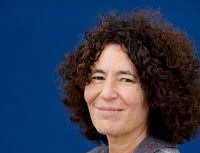 Who says sports and books don't mix? Well no one does really, but the point is that the Book Festival has entered into the spirit of the Olympics along with the rest of the country. Frank Cottrell Boyce (11th, 10.30AM) helped script the opening ceremony, Thomas Heatherwick (25th, 4.30PM) designed the amazing Olympic cauldron, Bill Jones and Richard Moore (17th, 2.30PM) explore the darker side of sport, and Francesca Simon (left) lets Horrid Henry (26th, 10AM) explore the... much lighter side! Let's just say he's invented crisp-eating as an Olympic sport – which fits in brilliantly with my scheme to introduce poppadom frisbee.
Posted by edbookfest at 19:26 No comments: