This year we have invited a number of guest bloggers to write about the Book Festival. Today’s post is by Pippa Goldschmidt who came to see Tom McCarthy. Pippa is part of the ESRC Genomics Forum Writers team. 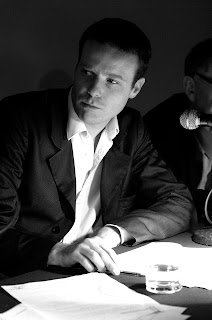 It seemed appropriate to go and listen to Tom McCarthy talk about Orpheus, the first poet, on the opening day of the festival. Actually, this was more of an audio-visual event than a straightforward talk. The author of the Man Booker Prize short-listed ‘C’ and founder of the semi-fictional International Necronautical Society showed clips from Cocteau’s film Orphée, as well as a video of Kraftwerk performing their song ‘Antenna’.
The Orpheus myth (one of the oldest of the Greek myths) tells how Orpheus was the first poet and musician, making the animals and trees dance to his music. After his wedding to Eurydice and her subsequent death, Orpheus goes down to Hades to fetch her back to the land of the living. He is allowed to do so, on condition that as he leads her away, he doesn’t turn back to see if she is following him (perhaps a reminder to him that he is not in control). But as they make their way up to the surface, Orpheus starts to doubt if Euridice is following him, and turns to look. That backward glance banishes her down to Hades, and Orpheus, having remorsefully foresaken all other women, is torn from limb to limb and his remains scattered over the land and sea.
So, according to McCarthy, what we do when we create poetry is gather up the pieces and broadcast them again in a never-ending cycle of reception and transmission. Even the word ‘broadcast’ has its roots in agricultural practice; it means the spreading of seed.
Cocteau’s Orphée shows the poet being inspired by listening to messages from the dead transmitted over the radio, illustrating McCarthy’s point that transmission and reception of poetry and literature are symmetrical events; the idea that writers create something out of thin air is more of a myth than the Orpheus story. Rilke’s writing  ‘Sonnets to Orpheus’ in a single month is a classic example of the poet channelling rather than creating from a vacuum.
And, although McCarthy didn’t mention this, perhaps we also know this from physics. The same antenna can be used to transmit radio waves as well as receive them. A couple of years ago, the radio telescope at Jodrell Bank, normally used to receive information from stars and galaxies, was used to transmit poems to the Moon.
At one point, the talk was interrupted by a deafening roar from planes overhead, taking part in the Tattoo. Pure noise, or pure transcendence; it seemed appropriate.
Originally from London Pippa used to be an astronomer. Now with an MLitt in creative writing from Glasgow University she has had several short stories published. Much of her writing is inspired by science and she is currently writing a novel about a female astronomer. Visit her website for more information www.pippagoldschmidt.co.uk
Posted by edbookfest at 14:01 No comments: